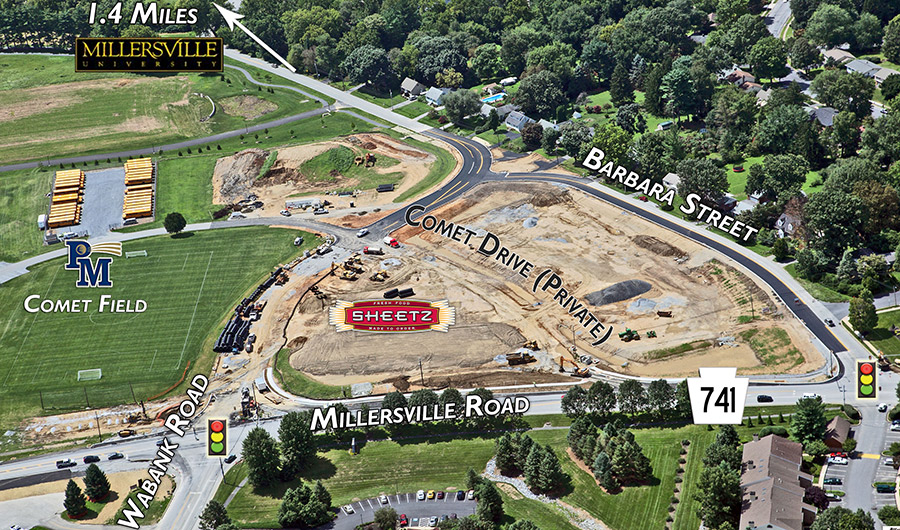 Construction began over the summer for a new line of stores in Millersville. Millersville Commons and Sheetz are coming to the corner of Route 741 and Barbara Street.

“Since the mid-1980s, Millersville Borough has been looking to have a convience store of some sort on that corner, and through the years till now its changed from a Wawa to a TurkeyHill and now to a Sheetz,” said Dr. Mike Leichliter, Penn Manor School District superintendent.

“LMS Real Estate is in charge of leasing the store spaces to companies, so far Sheetz is the main store, and Jake’s Wayback Burgers,” said Dr. Leichliter.

According to Dr. Leichliter, the district received about $1.6 million for 5.85 acre lot.

As sports have been going on at Comet Field since the summer, the only problem has been Barbara Street being closed, but since the summer it has reopened and traffic is moving smoothly.

Since sports are in season at Comet Field, that means the snack bar is open too.

Athletic Director Jeff Roth said, “The only problem for the home games is that people would probably want to go to the Sheetz instead of the snack bar.”

York Excavating started the early work in the summer and has continued to work on the project.

“The infrastructure of the buildings should be nearly completed by December,” said Dr. Leichliter. The project is expected to be finished by the end of the year.

LMS Real Estate company has been looking for tenants for the other shops and the bank branch.

Wabank Road will be extended through the light and will connect with Barbara Street, creating a four-way intersection at Rt. 741 and Wabank Road.

A safety aspect was made by adding the many walkways to make the area pedestrian friendly.

According to Dr. Leichliter, the money the district made from selling the land will be put into the district’s capital maintenance fund and used to maintain athletic facilities.