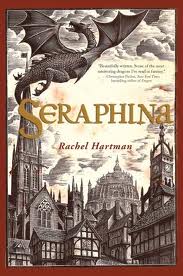 According to Rachelhartmanbooks.com, Seraphina is the winner of the 2013 YALSA Morris Award for Best Young Adult Debut Novel and a New York Times bestselling children’s chapter book. These awards are well deserved because the book absorbs the reader into its pages.

Seraphina tells the story of a teenage girl in a mythical world where dragons and humans live together in an awkward type of peace, the dragons taking form of humans. This awkward peace is at its breaking point, however, when the treaty that keeps the citizens of Goredd in line needs to be renewed. Seraphina takes on not only her position as court music composer’s assistant, but also an investigator of the death of Prince Rufus, along with Prince Lucian Kiggs. Along her way, Seraphina must face the problems of her identity and parentage, along with the lies that they have brought her to tell.

The book’s incredible length might push some readers away, but every page adds to the suspense that makes the reader forge ahead in the book. The beginning is confusing and a bit boring, but as the novel continues, the reader will realize that the slow beginning is worth the wait.

The development of the characters is a strong aspect of the story because you will find yourself wrapped up in the character’s relationships with one another. The characters, mostly Seraphina, are easy to relate to, which makes the story seem much more real.

The fictional world is also well developed for a fantasy novel, because of the details related to the dragons vs. humans feature of the story. All in all, the book was exciting and will make you want to continue turning the pages.