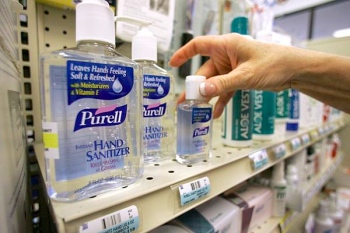 From prisons in New Zealand to the homes of many U.S. teens, hand sanitizer has become a parent’s worst nightmare.

Hand sanitizer contains 62 percent ethyl alcohol, and many teens have found a way to separate the alcohol from the goo to make it even more potent.

Kids have even made how-to videos and posted them on internet sites, which show them separating the alcohol from the hand sanitizer making it 120 proof and life threatening.  Some videos depict the teens getting intoxicated which has made the dangerous practice more widespread.

“(Students) would be “foolish” if they did (consume the substance). There are other elements in there that they may not be able to separate out that could be poisonous,” said the school nurse Anne Butterfield.

According to the Los Angeles Times, within the past few months, six teenagers have shown up in two emergency rooms in the San Fernando Valley with alcohol poisoning after drinking hand sanitizer, 2600 cases have been reported since 2010.

“This is a rapidly emerging trend,” said Dr. Cyrus Rangan, a pediatric medical toxicologist with Children’s Hospital, who also is director of the county Department of Public Health’s Toxic Epidemiology Program.

He also said that it only takes a few swallows to get intoxicated.

Years ago, people drank rubbing alcohol, mouthwash, and imitation vanilla (all of which contain some amount of alcohol in them), as a way to get drunk during Prohibition.  Nowadays, eens keep finding a new way to get their buzz on and the methods keep proving to be dangerous, even fatal.  Take bath salts and synthetic marijuana.

“It is a very desperate, sad act,” said Butterfield. “And they need to seek help for their problem with alcohol.”

The availability and low cost of hand sanitizer makes it a serious threat. It is all over the place, school, work, home, everywhere and teens can buy it off the shelves for only a few bucks.

Where some take the time to distill or separate the alcohol using salt, some choose to just drink it straight from the bottle.

“Local teenagers are gulping down hand sanitizer to get drunk — and many are landing in emergency departments instead, health experts warned on Tuesday,” according to an article by the Denver Post.