By Dakota Jordan and Corina Connelly –

The Hunger Games was set to light the world on fire when it reached theaters Friday, And with over one million tickets already pre-sold its expected to be a feast for fans everywhere. 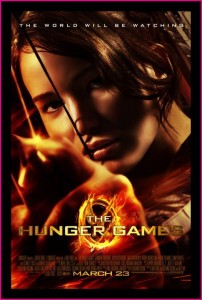 The Hunger Games takes place in a post apocalyptic world in what’s left of a nation that was once called America this nation of Panem is split into 12 districts each with its own commodity there districts are all controlled with an iron fist by the capitol and the all powerful president Snow. Each year as a show of subservience each district must present two tributes, one boy and one girl between the ages of 12-18. These tributes are then thrown into an arena to fight to the death until only one is left standing, that one is then declared the champion of the Hunger Games.

As the film’s premier quickly approached, fans eagerly awaited the chance to step into the theater and get lost into a world that has engrossed their minds since the day they opened the pages of the book.  The numbers were expected to keep rising as the release day quickly approaches. The producing company Lions Gates is reporting an expected profit of $95+ million in the first weekend alone. The gross receipts actually topped $150 million in the initial weekend.

The sold out signs started to be posted up in over 2,000 theaters. Fandango is already ranking it one of their top selling movies. Early reviews by some critics before the opening date, exclaimed your eyes will be thoroughly entertained as the two hour movie plays across the screen and that it is true to the books, which for many fans is what they want to hear.  In Los Angeles, the movie brought in $155 million and it is near the top of the record book according to the Lancaster Intelligencer Journal. As the next week rolls in, the odds seem that they will be in the film’s favor.