Space, the final frontier.  But for Angry Birds creator Rovio, space is a whole new horizon.

Angry Birds Space is the new title from the meteoric company and it’s showing the same popularity as their past titles, in the first three days after release ABS had already netted 10 million downloads.

ABS is the new high flying adventure which places you in the hands of six birds trying to rescue their eggs from the pigs, everything you’ve come to expect from Angry Birds except with on big difference, they’re in space.  And this isn’t just a simple re-skin of Angry Birds with a new space background, this takes Angry Birds to a whole new level utilizing small planetoids each with their own gravitational pull so instead of launching birds straight at a structure you may have to send your birds in an arc through two planets or even put them in centripetal orbit until they finally come crashing down. 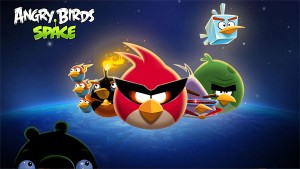 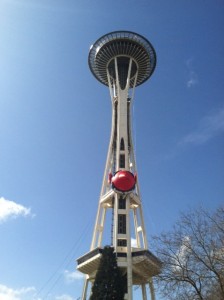 The new game puts you in control of 6 birds, 4 returning and 2 new ones, the basic red bird, the tiny blue bird that can split into three, the large bird now colored green instead of red, and the black bird which explodes on impact. along with these 4 birds the two new birds include a purple one who is much like the yellow bird except this bird changes trajectory to there target and a blue bird who changes all blocks it makes contact with into ice.

The new Angry Birds has become a hit, with a marketing campaign so huge that even the seattle space needle was rigged up to look like a huge slingshot.

With all this mad success and with Rovio now having 4 hit Angry Bird games, three of which still have updates rolling out every couple of weeks the real question to ask is where The next golden egg will come from.