It’s like a more customizable, creative version of PowerPoint, and Penn Manor students are catching on.

This cloud-based, no downloads needed, presentation software opens up a new world between whiteboards and slides. The zoomable canvas makes it fun to explore ideas and the connections between them. The result; a visually captivating presentation that leads your audience down a path of discovery.

“When I started teaching 15 years ago, PowerPoint was around,” said English teacher Scott Hertzog who is requiring students to produce a project using the new presentation software.  “[PowerPoint] is a tool that was used to death and you’ve seen them all before.  There’s something about Prezi, the way it zooms in is very creative,” said Hertzog.

Prezi’s most advertised feature is the ability to zoom in and out of your presentation. You can visualize your ideas, pan left, move right, zoom-in on a detail, or zoom-out to show the big picture.

Prezi is very customizable.  You can add custom time-lines, charts, and graphs.

But why would someone use Prezi instead of, the very popular presentation program, PowerPoint?

Hertzog is using Prezi in a mandatory project, and he has nothing but positive things to say about the PowerPoint-killer.

“Intuitive, I mean it’s really straight forward.  The learning curve is easier to overcome compared to PowerPoint or Keynote because it’s all there and it has a really nice interface,” said Hertzog.

Hertzog thinks using PowerPoint is like beating a dead horse.

Although, Hertzog doesn’t think that Prezi is the do-all solution to every presentation. 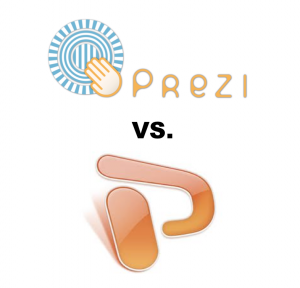 “Like PowerPoint, Prezi can also be overused,” said Hertzog. “Teachers say it’s just another tool in the toolbox for students, it doesn’t have to be used every time you need to present something.”

Prezi is also free, you can use it online with for no cost. And, everything you do on Prezi is open for the public to see.

“There’s nothing you need to download.  And everything you do on Prezi is public,” said Hertzog. “They’re not just doing it for me. They’re doing it so anyone in the world can see it.  It raises the stakes in terms of education, suddenly people from the outside world can comment on it.”

“PowerPoint is so 20th century, Prezi is the 21st.  With PowerPoint, you can’t customize anything, and a Prezi is just so much more fun to make,” said Barley.  “PowerPoint is just standard and boring.”

Another technologically advanced feature that Prezi has to offer is the ability to collaborate.

“Prezi Meeting” is an online collaboration feature that allows up to ten people (together or geographically separated) to co-edit and show their Prezis in real time. Users participate in a Prezi simultaneously, and each is visually represented in the presentation window by a small Prezi avatar.

This means a group of people can all be working on the same Prezi, at the same time, from completely different places.

Prezi is a free, creative, collaborative, and exciting way to create and deliver an amazing presentation.  What’s not to love?

One thought on “Prezi: Better than Powerpoint?”