There’s a new teacher that walks the halls of Penn Manor.

His name is William Shirk, and he’s a young teacher in his mid-20s with lots of ambition, ready to take on the challenges of working in a high school with over 1700 students.

It was the Spring of 2011 when Shirk graduated from Millersville University. He graduated with a degree in Special Education. Shortly after graduating, William attended a local job fair where Penn Manor had a table. This is where he met Mike Leichliter, the Penn Manor School District’s superintendent.

Some time later, Shirk was called and asked to come in for an interview for a position at Penn Manor High School. It went well and Shirk was then scheduled to teach a practice class at the high school.

After teaching the class, Shirk obtained the position and was hired to work at Penn Manor High School as a math teacher. 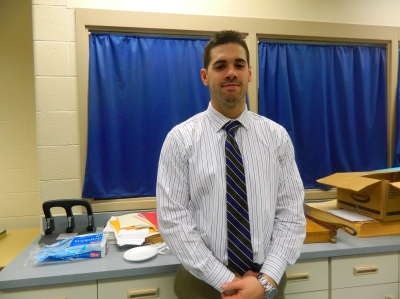 “Its been a very good experience, but very busy as well,” Shirk said about working at the high school in his first year. “Everyone here at the school [staff, administration, and teachers] has been helpful, and everything I’ve learned so far has prepared me for this.”

However, Shirk has to commute a far distance from Downingtown each day there and back from his house, which is approximately 50 minutes away from Millersville.

But the commute doesn’t bother the young, energetic math expert.

Shirk said that he enjoys working at Penn Manor and plans to continue to work here at the high school.