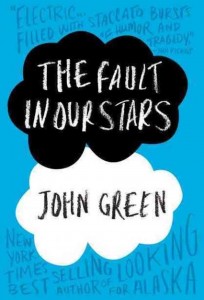 One of the most-loved novels today is one you’ve probably already heard of, either in a magazine article, in the newspaper or on television: ‘“The Fault in Our Stars” by John Green. It’s one of those rare books that will have you laughing or crying hysterically, depending which page you’re on.

One of the first scenes is set in a church in Indiana, in Hazel’s support group for teens with cancer, or the “Literal Heart of Jesus”. Here, she meets Augustus Waters, and (to use a well-worn cliche) her life changes. From here, Hazel and Gus share an adventurous relationship that takes them across the world, from Indiana to Amsterdam. The book is about their complicated, rollercoaster relationship.

“The Fault In Our Stars” is one of those books that you keep with you forever, in the back pocket of your heart. What makes the book so special is that it blatantly confronts and defies the stereotypes surrounding cancer and the “typical” cancer patient. Hazel and Augustus are not less whole because of their diseases, quite the contrary. The book emphasizes how their sicknesses are just a “side effect.” It’s not a story about cancer, it’s a story about Hazel and Augustus’s “little infinity.”

But “The Fault In Our Stars” is not one of those books that you can capture in a single review. This book is so much more complex. It’s something you have to experience yourself. One so fantastic and brilliant, that it has turned into a phenomenon.

Since its publication on January 10, 2012, the novel has become a New York Times bestseller. On March 2, 2014, The Fault In Our Stars is still #1 on the Young Adult list after a 64-week reign. Now, the book has been made into a highly anticipated movie, due to release June 6.The trailer, released last month, already has more than 11 million views on YouTube.

The author, John Green, has a huge fan base. People of all ages adore his books, most of which are bestsellers. “Looking for Alaska,” third on the New York Times Young Adult Bestseller list for 64 weeks, and “Paper Towns,” sixth on the list for 50 weeks, are two other popular books of his. Green collaborated with David Levithan, another well known young adult author, for the novel “Will Grayson, Will Grayson.” Also, he shares a YouTube channel, Vlogbrothers, with his brother, Hank Green, that boasts more than 1 million subscribers and hilarious and insightful videos every week.