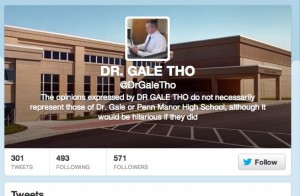 Have you ever wondered who is behind the screen of the Dr. Gale Tho twitter account? This popular account has 550 followers and is a parody of Penn Manor High School Principal Dr. Philip Gale.

The account was made for more than one reason, but Dr.Gale Tho said he mainly made the Twitter account because he wanted to make people laugh.

“You know, the burn book made people cry, Danielle’s page [@Play_Nice_PM] made made people feel good about themselves, and I thought to myself, why not make people laugh?”

Dr.Gale Tho added that he is careful about the jokes he makes.

“This page was meant to be funny, not to hurt feelings”, said Dr.Gale Tho. “I have been very careful not to say anything that could be taken seriously, like in the movie  Mean Girls when Tina Fey’s character gets her apartment searched when the burn book said she was doing drugs.”

Although he is mostly anonymous, there is one Penn Manor student who knows who the twitter account is.

“There came a point where I was curious enough about who ran another page that the two of us arranged a meet-up,” said Dr. Gale Tho. The anonymous writer said that the meeting was in a random parking lot where one student set off a car alarm,  and Dr.Gale Tho reported to the car to meet.

What does the actual Dr.Gale think about all of this going on?

“Some of the things are funny, and I’m glad for the most part that things have been appropriate,” said Dr. Gale. According to Dr.Gale, the student would not get in trouble if his name was revealed.

Dr.Gale Tho was not sure about what kind of trouble he might actually get in if he is exposed.

“I’d have to check the planner to see what the consequences for the first offense of making a funny Twitter page would be,” said Dr. Gale Tho. “One thing I will say is that I think it’s sad how we live in a day and age where schools have the power to monitor what you say on social media.”

At this point, Dr.Gale does not see a reason the page would need to be removed..

“No [it should not be removed], as long as it remains appropriate and nothing more inappropriate goes up,” said Dr. Gale.

“Initially, right after I made the page, every time the phone would ring in one of my classrooms I was convinced it was for me, and that sick feeling you get in your stomach would creep in.”