Being a musician, I can guarantee that all other amateur musicians has, at one point in their lives, fantasized about themselves performing on stage and taking the place as a member of their favorite artist Whether it’s live, on a stereo or through a pair of headphones. I call it the musicians fantasy, and I know that I have had one of these before, and along with it I can still clearly remember the first time that three others and I, collaborated and made a band in the hopes of one day being the ones on stage.

The very start of summer ’11 was when the first “jam sesh” took place. I was in my basement, which was home to my dad’s large collection of various music equipment such as turntables, mic stands, stacks of seemingly endless wire and cords, and speakers so large they can make things fall from the shelves and walls in my house if you play them just loud enough. 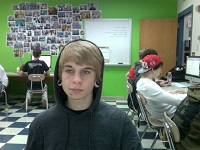 The band consisted of four people, two of them that were friends of mine from Hempfield, Cody and Kris. Cody did vocals and Kris played guitar. My brother Gavin was the drummer and I was the bass player. Our style of music that we aimed for was deathcore, which is a fusion genre of metalcore and death metal. Cody was the motivator within the group, and being so he came up with the band name; Arcana Curse. At the time it sounded cool, but now I have a strong dislike for the name because it’s really generic and it sounds like some 13-year old emo-kid made it up.

For some time our weekly band practices, that took place on Wednesdays and Sundays, consisted of us playing together and making up the music as we went so that we could adapt to playing with each other. That seemed to work at first, until Cody began trying to push us forward to put out a song. The troubles began from then on  because he started to feel as though he was the only one dedicated to the band. Gavin, Kris and I often found ourselves being lectured by him and we often dreaded practice because of the constant nagging.

However, we continued to practice and Arcana Curse produced its first song, which was never granted a title.

The band stayed together into the start of our junior year, (8th grade for my brother) and Kris became to be very unreliable at this point, never showing up for practice or making some excuse that he couldn’t be there. Cody became increasingly more arrogant in his lack of satisfaction with the band’s progress and my brother and I just had to put up with it.

It was November and the future of Arcana Curse was bleak, we had failed to meet three band practices in a row and talk between each of us was bitter and frustrated. One day after school the vocalist sent us all a text message telling us to meet up at the local Turkey Hill, so Gavin and I made our way there. When we got there, Cody was there to tell us that things weren’t working out and that the band should take a hiatus, (which was pretty much a permanent one, Cody just didn’t want to admit it). We all agreed that it was probably good to do so and went home after that, and I was really disappointed that the band fell apart and we couldn’t work it out, but there wasn’t anything I could do.

After the break up, I learned a great deal about being a band with my experience in Arcana Curse. If you’re going to be in a band, it takes a steady flow of dedication from all band members, and that one member cannot try to “be the band.” Don’t bother with unreliable people either, because I noticed how much you cannot do when just one of the band members isn’t there. Especially a guitar player, which resulted in absolutely no progress.

Even though my musician’s fantasy was never fully satisfied, I still loved those moments when we jammed and the music came off the top of our heads that resulted in a punishing new riff, or a unique, brutal breakdown that we always forgot to record because we were all trapped in the euphoria of the fact that we were making something original. The group and I might never become famous for playing deathcore, whether Arcana Curse got back together or not, but I’m sure we all learned that forming a band in your teenage years is way more then we could could of ever imagined.