By Jordan Rineer and Ryan Flexman-

The stage was set.

Hempfield versus Penn Manor for the Lancaster-Lebanon League championship.

It was the fourth meeting between the Comets and Black Knights this year. The Comets won the two regular season match-ups, the Knights won in a one game tournament but the Comets did not have their libero Mark Dano during that tournament.

Hempfield has won the last five consecutive L-L League titles. But not this year.

But the Knights streak has ended and Penn Manor’s student section was enthusiastic both at the game and when they inspired one player, Mark Dano, Libero, take it to social-networking.

“So proud to wear a Penn Manor jersey, you guys make it special #realtalk” Mark Dano via twitter Wednesday night after the game.

The atmosphere was electric.

“The fans were great. We have always had fans there but the students who came out and supported really made a difference,” said senior Joey Jackson.

The crowds chanting back and forth, you could feel the tension.

One Hempfield student tweeted “I wasn’t even at the game and I’m annoyed. No school gets me more p***** than Penn Manor.

The Comets hung onto a small lead before a Dayonte Dixon kill and a Hempfield violation gave them the first game 25-21.

Dixon said his teammates Jackson and Devon Reis, a junior, stood out in the second game.

“Joey and Devon add so much variety to our offense which makes it hard to stop,” explained Dixon.  “Our defense was really good, too.  We were picking up balls left and right and I think that got in Garrett Dimm’s head (Hempfield outside hitter) because he couldn’t put as many balls down.” 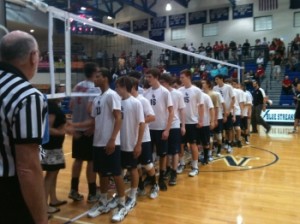 Jackson came up big in the late stages of the second match to lift the Comets over the Black Knights yet again 25-22.

The Comet players wanted nothing more than to sweep their rivals Hempfield in three games, but that was not meant to be.

The Comets had a late lead in the third game which made the Penn Manor fans heads maybe a little too big.

“It should have easily been a 3-0,” said Dixon.  “We’ve always had problems finishing a game and that was a perfect example.”

Some could argue the chant “I believe that we just won” by the Penn Manor crowd started a little too early, which ruined the flow of the Comet players. Hempfield capitalized, scoring four straight points, winning the third game 26-24.

“That chant was mainly funny,” he said.  “The crowd just pumped us up.  It’s nice having support because volleyball has never been the most popular sport.”

It was tough for the Comets to break Hempfield’s momentum, after such a powerful statement made by the Knights.

The fourth game was all Penn Manor. With a 22-12 lead, the Comets coasted into a 25-16 rout of the Knights. The fans stormed onto the court in celebration of the undefeated season.

The celebration started after the final whistle with the fans bolting onto the court and chanting “undefeated” while the Hempfield fans headed for the exits.

The fans congratulated their classmates, friends, and the new LL League Champions.

One thought on “Comets Over the Knights Yet Again”