As I buckled my seat belt, awaiting the 45- minute trip to Reading, I prepared mentally for the task at hand.

We were headed to the famous Peanut Bar, where they provide you with an abundance of peanuts and, when you’re finished, they encourage you to throw your shells on the floor.

The car ride was uneventful mostly consumed by talks of Facebook updates and lacrosse practice.

When we arrived and I saw the shells on the ground I was hesitant to proceed, it isn’t something you’re used to seeing,but my stomach wouldn’t let my feet turn around.

The peanut shells were unsettling at first and raises question about sanitation, but they assure you everything is copacetic.

While the peanuts were appetizing, they were not the treat we traveled outside the comfort of Lancaster for.

No, No, we came for a much bigger reason.

I’m not sure if there is anything better than wings. They are the ultimate man-food, greasy,fattening,and delicious.

This isn’t my first time facing the daunting task or trying to consume more wings than the rest of my cohorts. I always leave bloated, messy, and usually sweat beads are dripping from my forehead.

I’ve yet to come up victorious, every year I fall to the heavy hitters like Errol”Double Barrel Cannon” Hammond  and Simon, but this year with a weaker field that included two rookies I thought this is my time capture the belt.

There are two simple rules to our annual wing eating contest.

1. Clean all the meat off the wing

2. No using the bathroom.

Everything else is allowed.

I had been preparing myself all day for the task at hand,I even skipped lunch, which is rare for me.

The first round of wings came promptly.

The heavenly aroma penetrated my nostrils bringing my hunger and love to a crescendo before taking that first delicious bite.

The thick special sauce dripped from my hands and face as I easily knocked down the first 10.

My strategy was to eat fast and avoid bleu cheese if possible. Also the most difficult part is trying to limit my soda consumption.

Blue cheese, while extremely tasty, is an easy way to fill yourself up quick, so even though I love it if I wanted to win I’d have to avoid it.

I finished the first round faster than the rest of my competition.

I was in my zone. 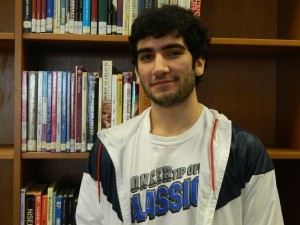 The next five came out and I once again downed them faster than anyone else.

Fifteen wings down and I felt like I could go for 60.

Everything was going well, twenty-five wings done and still no signs of letting up.

Then around wing twenty-seven I started to feel the dreaded food wall. That certain grumbling,no it’s not really grumbling it’s like there are 10 anti-war protesters putting up a human barrier in your stomach that indicates ” No More.”

I have heard all about the wall from one of my favorite TV shows, Man Vs Food.

The host goes around the U.S attempting all different types of food challenges, including multiple wing challenges.

I’ve seen him power through much tougher challenges than this, so I used him as my inspiration.  I recalled when he took down five pounds of nachos in Michigan or ate six of the hottest wings in the World in Detroit.

I finished my 30th wing, although I must admit it took me a couple extra bites to get it down.

The next round came out.

The smell that once brought me delight now made me nauseous. The sauce that once electrified my taste buds now felt thick and disgusting.

My only chance at eating more wings was to go to my secret weapon.

I had held off eating it so far because I knew it would only fill my stomach quicker, but this was the Superbowl and I needed to pull a Mario Manningham out of my hat, I needed to play a David Frese in the World Series, I needed to pull kobe during the… damn well Kobe is always clutch.

I used the Blue Cheese to change up the taste in a hope to ignite my hunger once more.

I smothered my 31st wing in the thick,creamy, and magnificent dressing.

I was no longer in the lead. The wrestler had overtaken me for the top spot, which should not come as a surprise considering he spent that last three months eating nothing more than lettuce and carrots. He was making up for lost time and he quickly passed by sucking the meat of his 36th wing.

I downed my thirty second wing… and then it happened.

There was just no space left.

I peered down to my sauce covered plate, 3 wings looked back at,  they were taunting me. They knew they had beat me yet again, it was the same look Hempfield or Township has after we lose another close game to them. That look of supreme satisfaction in conquering your opponent.

I put my head down in defeat.

Once again I would emerge as the loser.

At the end of the day I was $10 poorer,had gotten wing stains on my shirt, drove 45 minutes, and had put myself into a serious food coma.

I definitely left the Peanut Bar full, but far from satisfied.