The purpose of FFA week is to give members of FFA a chance to educate the public on the importance of agriculture.

Founded in 1928 as the “Future Farmers of America,” but later changed in 1988 to the “National FFA Organization,” or FFA, it is the largest youth organization in the United States.

During FFA week, members are encouraged to wear a certain clothing each day to show their pride for FFA week. Tuesday is camo-wear, Wednesday is wear your official FFA shirt, Thursday is John Deere vs. International, and Friday is flannel Friday.

Tuesday, February 21, was the awards ceremony. Members of FFA are interviewed by a table of judges for them to decide if the member is eligible to win the award that they have applied for.

Wednesday was the Teacher-Staff ice cream social. Members of FFA made homemade ice cream and served it to the teachers and staff of the high school along with drinks, snacks, and various ice cream condiments such as chocolate syrup and whipped cream. The ice cream was made in a metal cylinder surrounded by ice and salt with a paddle that churns the ice cream when a handle attached to it is cranked.

The only flavor that was made was vanilla but those who there enjoyed it. Teachers Billijo Atkins and Brittney Klugston described the ice cream as, “creamy and refreshing.”

When interviewed, Doug Fellenbaum, an ag teacher here at the school revealed the recipe of the delicious dessert. It consisted of milk, sugar, heavy cream, evaporated milk, condensed milk, 1/2 carton of egg beaters and vanilla.

Friday, February 24 is the FFA lock-in. Members of FFA will spend a night in the ag-wing getting to know one another, and playing games. The lock-in starts at 7pm and will go until 8pm the following morning.

Kayla Major, a FFA member said, “The lock-in will last 13 hours and the goal is for members to pull an “all-nighter” and stay awake until the end of the lock-in the next morning. If someone gets tired though, there will be a room for the members to relax or sleep if they get tired or aren’t able to make it through the night.” 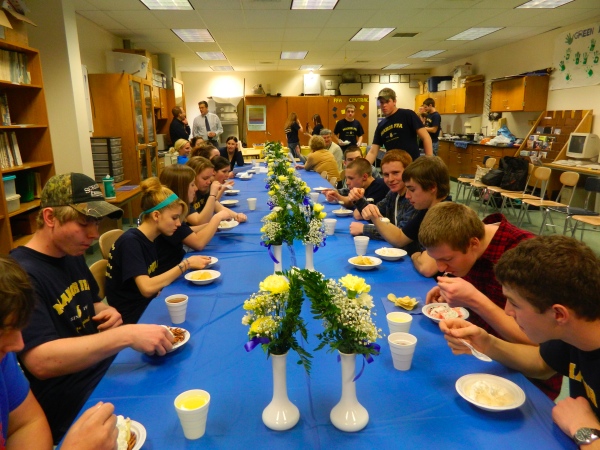 Sign up for the lock-in is in room 342 and members are encouraged to bring their own snacks. Breakfast will also be served in the morning as well.