Schettler was diagnosed with epilepsy, but that did not stop him from playing school sports, including track and field. Even though this puts him at more of a risk, it’s not stopping him.

Schettler is ranked first in the mile for track and field in the league, and broke a school record in cross country this past fall. Many say this is impressive, without even knowing what he has been through.

Schettler said he started having mini seizures in eighth grade, and was told by his doctor that he had a disorder called epilepsy.

His doctor told him at that time that epilepsy was a disorder due to his growth spurt, causing him to suffer five to eight seizures daily.

“At first I didn’t know what to think,” Schettler said. “I was scared and nervous to find out what this meant was going to happen.” 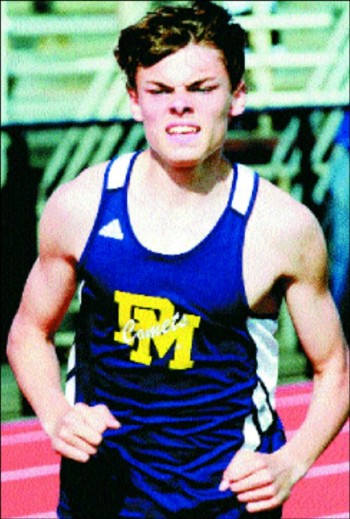 Doctors told him a week later that he may not be able to walk ever again.

Schettler said this was the hardest part of all. He said he has always wanted to be a long distance runner and being told it was questionable for him to even walk again was really tough for him to accept.

“My parents were obviously freaked out, but didn’t want to show it to me because they didn’t want me to be more scared than I already was,” he said.

“I was in the hospital for around two weeks when I first learned about my epilepsy,” said Schettler, “and I honestly cannot remember even one of those 14 days because of all of the different medications that they had me on.”

Schettler also said, “I don’t want people to treat me different from knowing this now, it’s over with and gone.”

About one year later, Schettler said he was officially in the clear and done with the seizures and epilepsy in general.

Schettler is a six-foot, lanky kid with messy brown hair. With his long legs, he looks like he was born to run.

“Now that that is over, I realize that I am actually glad I went through that,” Schettler recalled. “It taught me that at any given time, anything can go wrong in any way and there is no way of predicting it. Therefore I live every day like its my last, and don’t take anything for granted.”