Drivers be wary next time you cross a Pennsylvania bridge.

For the fifth year in a row, Pennsylvania tops the charts in percent of poor conditioned bridges throughout the nation. 26.5 percent of PA bridges were reported as structurally deficient.

This is compared to a national average of just 11 percent, less than half of PA’s percentage.

There are about 54 structurally deficient bridges in a 10-mile radius of Penn Manor High School.

A deficient bridge is not necessarily unsafe, but needs to be monitored or repaired and does require 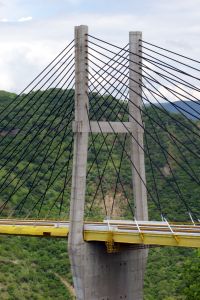 “There is a large inventory to keep up with,” said Greg Penny, the Community Relations Coordinator for PennDot.

The rating system to determine if a bridge is up to standards has three components, the deck, superstructure and substructure.

Bridges rated deficient are inspected every year, instead of every two years when most bridges are inspected. Bridges scored very high may be inspected up to every four years.

“The bridges have been active for a long time,” said Penny. “Rendell started the Accelerated Bridge Program so we get more money to address more bridges.

How much the repairs cost depend on the bridge and what exactly the bridge rating is. Some components take longer to fix resulting in a higher cost.

According to philly.com, due to the $4 billion budget deficit, PA will repair 45 percent fewer bridges this year than in 2010.

Corbett plans to continue borrowing $200 million a year for the Accelerated Bridge Program.

To find out what bridges aren’t quite up to code in your area, visit t4america.org.