A 15-year-old girl steps into a high school hallway on the first day of her freshman year. As she walks to her very first class, she imagines all of the things that will take place while she’s here, both good and bad. Her first real relationship, football games,  late night cramming for finals, and of course, prom.

For many teenage girls, prom is one of the most important events in their high school career.  It’s an event that they can look back at and smile about, hopefully.

In order for prom to be the magical night that everyone hopes for, many things have to fall into place. First and foremost, you need a dress. 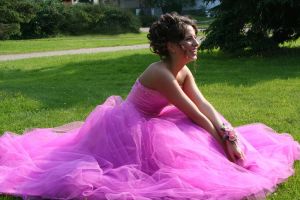 And that’s going to cost you.

Fifteen girls say they have set limits for the most they are willing to spend. Their limits ranged from $150-$600.

Senior Dessie Jackson says, “Its not that I don’t have a limit, but prom only happens once. I’m not sure [what my limit is], it would depend on how much I love the dress.”

Although there are varying opinions on what is an acceptable amount to spend on a dress, there seems to be an overall desire to find the perfect one.

And you can’t have the perfect dress with a not-so-perfect pair of shoes and old tarnished jewelry.

Depending on where you shop and the style of shoe you’re interested in, you could be paying anywhere from $15-120, and possibly even more than that number.

On top of this, you have to include the amount you may be spending on a matching necklace, earrings and any other jewels you will need to finish off your look.

Some girls, such as Kayla Kauffman, say they will try to wear some jewelry they already own. “If I have something to match my dress I’ll wear it, if not I’m buying something new.”

Kristina Mast says she too can cross something off her list of expenses since she already has a pair of shoes she is planning to wear.

Of course all of this means nothing if you aren’t going to prom, and you can’t go to prom if you don’t have a ticket.

In previous years, tickets have cost around $30, with an extra $15 tacked on if you are bringing someone who is not a senior here at Penn Manor. Add this all together, and you could be looking at an awfully large price tag.

On the plus side, the senior class this year has raised somewhere between $1,700-$1,800, according to class advisor and English teacher, Lisa May.

As a member of the senior class officers, Jackson says “We’re in a comfortable place as far as paying for prom goes. Freshman year we set a goal of how much [money] we wanted to raise and we’ve exceeded that.”

May also said that although an exact amount for ticket price has not been set yet, the senior class can expect to spend $25 ticket with a $5 additional charge of the regular ticket price for any students who aren’t a part of the graduating class.

The class is planning on keeping the costs as low as possible, and since the class has raised a large sum of money,  this should be a fairly simple task.

4 thoughts on “Prom-Seniors Try to Keep Costs Down”