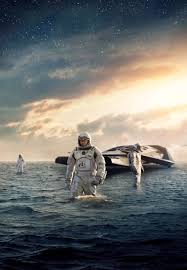 Director Christopher Nolan becomes the all-seeing eyes into our future in his new movie Interstellar. Planet Earth meets its greatest environmental disaster. The Earth suffers blight and a gigantic dust bowl that slowly causes it to become uninhabitable.

Joe Cooper (Matthew McConaughey), the main character of the movie, is a former member of NASA now living with his daughter Murph (Jessica Chastain) and father-in-law Donald (John Lithgow). Murph was getting in trouble at school claiming that the moon landing was fake to justify the “wasting” of important resources on the space program.

NASA has gone underground and came up with a plan to save the Earth’s population. This top-secret operation requires Coop to be the commander along side of his former mentor Dr. Brand (Anne Hathaway). The operation requires the use of a worm-hole to another galaxy where Brand thinks there is intelligent life.

There are major sacrifices that Coop has to face with his family. Decades pass on earth with messages coming from Murph. Coop plays them back, and creates one of the best scenes of the movie.

The height of the movie presents itself with the exploration into the wormhole. This mind-blowing scene shows the sheer extent of our imagination. Interstellar is movie of suspense and emotion reveals a “sneak peek” into what could be our future.