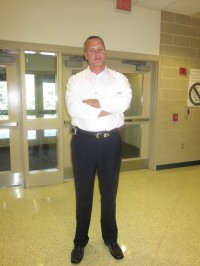 After just under six years at the helm of the high school, Gale’s position will be overtaken immediately.

Though it may seem like a coup d’etat, Kramer insists that he thought he was the right man to take the position ever since it opened up in 2009.

Under Phil Gale, state-wide standardized testing scores have been well above state average. Also, over 70 percent of students have pursued post-secondary education, and student dropout rate has been far below state average.

“Mr. Kramer is going to make a good principal. He always comes to work with a positive attitude and is always willing to help any student who needs it,” remarked a Penn Manor sophomore.

Doug Kramer has taught math to students of all ages, ranging from ninth to twelfth grade, so he has experience with kids of all ages.

“Well, I would say it’s a good decision but I’m just not sure how kid-friendly Mr. Kramer is. Everyday I would come out of his classroom with a headache from his lessons. Who even needs to know what the asymptote is of the trinomial on the board, or the sine of negative two-thirds pi?” remarked another Penn Manor student.

“Dr. Gale can sometimes be intimidating, and Mr. Kramer just doesn’t come off as that. I think that’s a good thing,” explained another student.