A new study just came out saying that if you are excluded when you are a kid then you are more likely to be overweight. You gain weight and then as a child you  are excluded more and as a result you gain even more weight.

“I used to be fluffy when I was little but I wasn’t ostracized. I was just naturally a little bigger,” said Brandon Smertz a senior at Penn Manor. 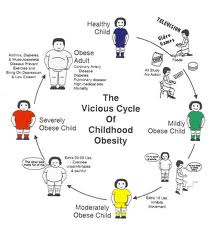 The idea for the study was brought up by Jacob Barkley, who is an assistant professor in exercise science at Kent State, after watching his three sons play out side.

“I noticed when friends came over, the intensity of their activity increased dramatically. After seeing that, I went and looked at the literature in terms of peer influence and physical activity behavior,” said Barkley.

It is a dangerous cycle that harms kids around the world everyday, according to the research. Some think that this is a major break through  in the understanding of childhood obesity.

In this study 19 children boys and girl from the ages 8 to 12 completed both sessions of experiments. The first session they were on the computer and playing a ball-toss computer game. Some children got the ball a third of the time during the game and the others were excluded almost the whole time.

After this session, they were taken into the gym and not told what to do. The kids that were included in the game were found to have a 22 percent increase in physical activity than the children who were excluded. On the other hand the children that were excluded were 41 percent more likely to particiapate in sedentary activities such as reading, coloring or playing matching games

This study really shows and confirms the link between emotions and obesity, researchers said.

Amy Stanford who works with obese children at the Sports Medicine Center at Akron Childrens Hospital said they support any physical acticity.

“We try to encourage kids to find things that they enjoy doing. That does not always mean it has to be in a group. If there are things that get them moving and physically active that they can do with their families or with a best friend or even by themselves, we encourage that,” explained Stanford.

Some Penn Manor students feel like this isn’t always the case.

“That can’t always be true. I had plenty of heavyset friends and nobody ostracized them,” said Kara Ann Overmyer another senior who goes to Penn Manor. “I mean I guess it could be true but I doubt it.”

However others saw some validity in the preliminar research, like Penn Manor’s Bob Warfel.

“I can see that being true. There are a lot of obese kids around and most of them I could see being ostracized. I have seen it happen to kids and it sucks but it happens every once in awhile,” said Warfel.