Dylan Tremellen, a 16 year old student at Penn Manor is really talented at a sport but he won’t win a varsity letter for it.  He races ATVs and he’s good.

It all started five years ago when his dad bought Tremellen his first ATV – an All Terrain Vehicle – a quad and he has progressed ever since. 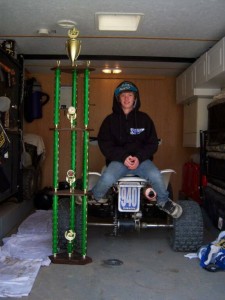 But then he just seemed to disappear from racing.  Turns out racing motor vehicles is one of the most expensive sports for a young person.

Now he is back for 2011 and he’s picked up some new sponsors like ERC (Environmental Recovery Corporation)  who will be paying for all of his travel expenses for this season.

He was also signed to a racing team called “Media Allstars.” He is being sponsored by over 10 different companies such as Maxxis Tires and Fox Shocks, who will all be contributing to help him race for free.

But Tremellen credits his dad most of all for his success, saying he is really the one who inspires him to do well in his races.

Tremellen’s hard work seems to be paying off. He started his 2011 season by practicing in Maryland last weekend and so far he is looking good.

“I feel strong in my bike and my sponsors and myself to make this year a winning one!” Tremellen said.

Tremellen will be competing this year in the Production B and 4-Stroke B classes. He will be racing at tracks i

n states like Georgia, Alabama, Michigan, Tennessee, and many others.

He is looking to come out ahead in all of his races so that he can go for that National Championship in the 2011 season.